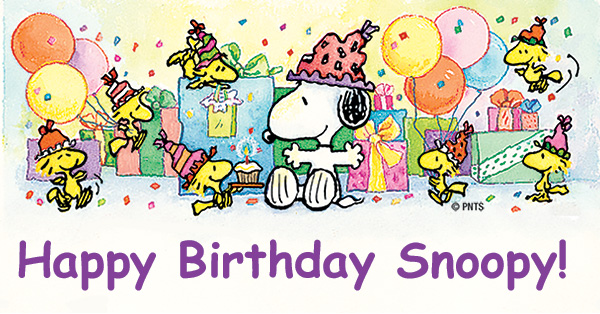 Happy Birthday to Snoopy! As revealed in some of the Peanuts comics, Snoopy’s birthday is August 10! Since Snoopy’s first appearance in the Peanuts comic strip on October 4, 1950, we’ve all come to love the imaginative and friendly beagle. As Charlie Brown’s beloved pet, Snoopy has a special place in the hearts of all the Peanuts characters and in our own with his fun-loving, lazy, sometimes human-like, and funny personality.

But before Snoopy was called Snoopy, creator Charles M. Schulz originally planned on calling him “Sniffy,” but that name was already taken by another comic. So Sniffy became Snoopy!

Although in the early Peanuts comics, it isn’t clear who Snoopy’s original owner was, the comics showed him interacting mostly with Charlie Brown. Later on, however, one of the comics told the story of how Charlie Brown’s parents bought Snoopy to console him after a bad day at the sand box!

In all the Peanuts comic strips he’s appeared in, Snoopy is portrayed as having a playful, fun, and caring relationship with all the Peanuts characters – although, he tends to annoy Lucy at times! His best friend though is Woodstock, his little yellow bird friend. They first met when Snoopy took care of Woodstock after his mother left the nest. They are often shown playing together in Snoopy’s fantasy world when he’s playing the role of The World War I Flying Ace or The World Famous Attorney.

Whatever role Snoopy’s pretending to be, he always seems to fail, albeit endearingly! Whether it’s the attorney, the pilot fighting against the Red Baron, or being Joe Cool, he still has fun in his imaginary lives.

Fun fact: Colorado Springs, Colorado, the home of Current Catalog was once also the home of Peanuts creator Charles Schulz! He lived there during the beginning of his career in the early 1950s for a couple of years, after the debut of his peanuts comic strip. How cool is that!

Read more about Snoopy’s history at the Peanuts Wiki page!

And in honor of his birthday, check out our selection of Peanuts gifts and stationery! Bring Snoopy and the entire Peanuts gang home!